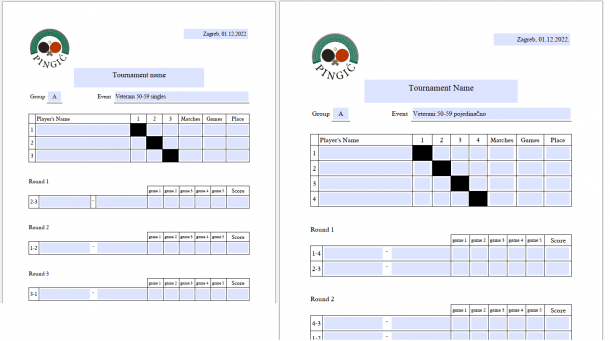 You can find pdf forms for tournament group stage for 3, 4, 5 and 6-player groups in Documents and forms menu

In order to help tournament directors to manage tournament we prepared a set of forms in a pdf form format.
In contrast to usual pdf documents, these forms can be filled on a computer, either partially or in full, to be saved as pdf documents and printed.

We prepared forms for groups consisting of 3, 4, 5 and 6 players as such groups are the most usual groups on tournaments.

It is intended for all the group details (tournament name, date, event, group name) to be filled in the form and form to be saved on a computer. Then it should be printed and handed to players or umpire to fill them by hand during the tournament.

After all the matches in a group are played and places are calculated, we recommend to type in all the results in a previously saved form and save them. That way you will have tidy and legible documentation and be able to publish it on Pingić web site so anyone, including tournament directors and umpires can print them during the tournaments or later and save them in their archive.

Hopefully we helped you a bit and we wish you many more new tournaments.